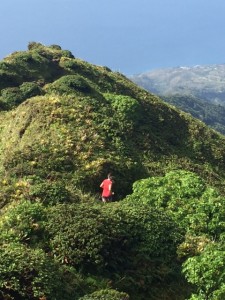 When the shaking started, I was deep, deep down—cocooned in a dream that was yanked away from me when terror plunged its greedy hand into my sleep and hauled me spluttering towards the surface.

My first, half-formed thought: we’ve overslept. The dog has leapt onto the bed and is stomping all over us, heavy-footed and panicked about his breakfast. But for the bed to be bucking and jolting like this, our cocker spaniel must have gained at least three hundred pounds overnight, more like five hundred, morphed into a horse, a hippo, a Tyrannosaurus Rex.

Thrashing towards comprehension, I blink in the half-darkness and scrabble at my ears to pluck out my earplugs.

An angry battering. Loud bangs and sawing creaks. The tall windows are shuddering manfully beside the bed. A tropical storm? But the trembling isn’t just me, it’s the walls and bedframe too, the mirror above the headboard, everything having a belly-laugh. I clutch at Tyler, who has made it to wakefulness at the same moment as me. An earthquake? Our eyes ask each other simultaneously. Yes, an earthquake! And then the shaking stops.

To get on WIFI to download your email or to Google “tremblement de terre, Caraïbes du Sud” in our tropical paradise of choice, you need to skulk behind the guesthouse with the sun-drunk insects looping in the shade, the gaudy shrubs, the haughty palm trees, swaybacked and disapproving. Worse, you must expose yourself as the sort of person who thinks it is important to download email and Google things while vacationing in a tropical paradise.

The previous evening, I’d tottered away from the sweeping view of the bay in search of the wavering WIFI signal, brandishing my smartphone like a Geiger counter. I wasted the entire plummeting sunset, glowering at my screen and swatting at mosquitoes in the sinking heat. Martinique is one of 14 countries on the CDC’s blacklist for the mosquito-borne Zika virus so it’s a not-so-flattering insight into my psyche that I’m willing to risk near-certain infection by a Ugandan Flavivirus so as to research Flaviviruses on the internet.

I have no intention of getting pregnant—never did—so we christened the virus Zeke, giving the same name to any of its winged vectors (zippy little fuckers, almost un-killable) and carried on with our vacation. The thing is, being child-free, sheepishly dual income and capricious with our leisure time, we’d told almost no one we were coming here, flying to the Caribbean from New York on a short-notice winter escape.

The morning after the shaking, Tyler took it upon himself to entrap enough WIFI bars to search “Earthquake, Martinique.”

“For all we know it could have destroyed half of Chile and what we felt was next to nothing,” he pointed out cheerfully, setting off for the garden behind the guesthouse with his iPhone. Straining against my 21st century instincts, I stayed put, resolutely enjoying the view, the feathery rustle of palm leaves and the shrill chitchat of birds. I picked up my pen and my journal and busied myself with remembering how they worked.

“Four-point-nine on the Richter Scale, epicenter here,” Tyler said when he returned.

I looked up from the almost nothing I’d jotted down. “Here, as in Martinique?” I asked.

“Here as in here,” Tyler said, pointing at the terrace where I was sitting. “Petite Rivière Salée.”

Wow. Here. Could we have almost died?

It’s an arresting notion, and one I toy with on the drive to Mt. Pelée, Martinique’s still-active volcano, which we were intent on hiking up that day. As in, the morning after the earthquake. (What could possibly go wrong.) Could we have died? What if we didn’t come back?

“What are the times you’ve almost died?” I muse to Tyler. He’s white-knuckling the wheel of our teensy Twingo while a wide flatbed truck groaning under a towering load of sugarcane strapped down by dental floss veers past us in single-lane traffic.

He’s quiet for a minute, then reminds me of the time I lost control of our right-side drive rental car at 130 km per hour on the N1 somewhere just north of Lesotho.

I bat this offering aside. “No, no. Not including the times I’ve almost killed us.” I’m thinking of a rock-climbing fall I had in Squamish with a belayer I disliked whose name I can no longer remember, and my gear held. An aborted decision to walk alone on a dark road back to my hostel from a restaurant in Pokhara. A sketchy scramble across a rickety cliff-top plank on a hike in Gran Canaria (Was I on the cusp of dying? Then why did Tyler take a picture?). 9-11 when I was reporting on a heart failure conference in Washington, DC, (nowhere close to the planes crashing into the Pentagon, but still: tanks on every street corner, everyone jittery). An electrical storm at a campsite in Botswana that set our Therm-a-Rests jumping with thunder and lightening, transforming our tent into a disco for minutes on end as if someone was fluttering the light switch on-off, on-off. For the most part, all of these were the happy hazards of a hard-working but privileged life spent nowhere war-torn or ravaged by disease. My whole life long, I’ve dumped my pennies on experiences, not things: these are the small prices paid for venturing out and adventuring. So yes, fear like a rusty spoon in the mouth, my heart twanging like a banjo. But did I dodge death?

“Stop worrying about dying,” Tyler says, his eyes fixed on the winding road. There’s a mix of exasperation and tenderness in his voice. “It’s boring. And we’re on holiday. You’re supposed to be looking for a bakery.”

Zeke won’t kill us. It might have given me a headache our first night, but so too could the expansive rum-tasting we did at St. James distillerie followed by the bottle of 4€ Bordeaux we bought at FranPrix and glugged on our WIFI-free terrace. Zeke may also have given Tyler the mottled red rash across his upper back, but so too could the heat and humidity—the very things we came here for, along with the mountains and the rum.

But I can’t help but worry about the expectant mothers I’ve seen on this island, hands on stomachs, wondering if they’re worried about Zika virus—no vaccine, no cure, no certain link between getting infected and having a congenitally malformed baby. That’s scarier than an earthquake. For Tyler and I, childless, losing others has always seemed so much more unbearable than dying ourselves. Friends and family would miss us, presumably, and the spaniel would have to up his charm-game so as to find another loving home. But it’s not really dying I’m worried about—the car crash around the next corner—so much as not getting enough other things done while living. As in, it’s not enough to simply be vacationing in the tropics, I should also be training for a triathlon, writing poetry, and selling a travel article to Runners World. It’s not a fear of death, it’s just a reluctance to debase myself with suboptimal multitasking.

The hike up Mt. Pelée is sublime with nary a whiff of molten lava juddered loose by an earthquake. I make a promise to myself: when we get back on decent WIFI, I will email loved ones to tell them where I am, send postcards, and update my blog. In the meantime here’s a volcano, steep and lush, misty and taxing, my heart thumping lustily at the joy of being healthy, off-line, and on-holiday. On the lee side, moist and muddy, a mosquito lands on my bare arm and swift as a tragedy I smack it dead. “Zeke!” I pronounce jubilantly, flashing a corpse-splattered high-five at Tyler and feeling alive, alive, alive.